A few days ago I received a pack of tomato seeds from Heinz from a competition here: https://www.facebook.com/HeinzKetchupUK/app_300380653443730

I decided to plant them this weekend as the kids love growing their own plants, but when I went to get the seed trays they had all broken over the winter. Not to be deterred we decided to make some pots of our own from stuff that we had lying around the house. The first plan was to make some paper mache pots from a pile of old newspapers. Unfortunately this plan was thwarted as someone had thrown them away! All we could find was a pile of junk mail so we decided to have a go at making some from that instead. First we gathered together some PVA glue, some plastic cups to use as moulds, some vaseline and a bowl. We covered the outside of the cups with the vaseline, watered down the PVA glue and tore the junk mail into small pieces.

It was then time to get dirty! No 4 had a lovely time dipping her hands into the mixture and plastering it all over the cup (I quite enjoyed it too – there is something quite addictive about peeling dry PVA glue from things)

When we had coated the cups with a thick layer of paper mache it was time to leave them to dry. It had taken us the best part of an hour and at this stage we only had two pots. 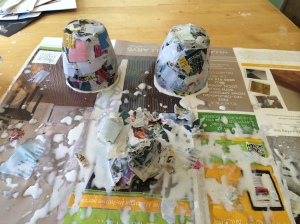 We decided that we would never have enough pots to plant all of the seeds at this rate so needed a quicker method of making them. I remember seeing small pots made of newspaper and looked up a method for making them. Unfortunately most methods required pieces of equipment that we didn’t have but we did find one method that used a wine bottle. We made one of these but the pot was far too big for our purposes. Having search the crockery cupboard for something smaller that had a big enough hole in the bottom we were almost ready to give up when we thought of trying to make them using the inside of a toilet roll. We were really pleased with the results so I thought I would share how we made them:

Roll the paper around the tube and tuck the loose paper into the end.

Turn the pot the correct way up and flatten the paper inside to make a base. (We used the end of a spoon to help with this).

Remove the tube and there you have it!

We had far more fun than taking a trip to B&Q, we reused some of the junk mail and it didn’t cost us any money.

Hopefully the paper mache pots will be dry tomorrow as we are going to paint them before planting the seeds. I will post some pics of the finished product when they are done.

As a big fan of giveaways myself I am running a competition to launch my new blog.  For your chance to win a £20 Amazon voucher complete the Rafflecopter.

Come back each day for extra entries.

This is my entry for the Furniture Choice Blogger Competition http://www.furniturechoice.co.uk/Out-With-The-Old.htm

I have a number of items of furniture to choose from when finding something that needs to be  replaced!  A lot of our furniture has been around for at least 10 years and a lot is no longer fit for purpose.

The thing that would make the biggest difference to our family life however is a new dining table and chairs.  We purchased our current one before the youngest two were born and therefore the one we have is not big enough to accommodate everyone, which prevents us all from eating together a lot of the time.  I love dining with the  whole family as it is a special time to catch up with what has been happening during the day and to converse with the kids who I am sure would prefer to be eating in front of the TV.  It is a particular problem if we have guests as no one has enough elbow room to eat anything.  The table and chairs have also suffered over the years.  No 4 is a keen artist and the table looks the worst for its regular encounters with paint, pens, glue and scissors.  Because we purchased the table before the younger two were born we also have odd chairs as we added extras later on.  As you can see from the pics the chairs have also suffered from the attack of paint and glue, plus the older ones are water damaged and extremely ricketty! 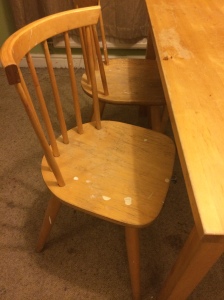 The paint splattered chairs are particularly embarrassing when we have guests, especially when whey wobble  as they sit down.  Christmas is always fun as we have to resort  to putting our particularly attractive camping table on the end of the dining table!

Furniture Choice have a number of lovely dining sets to choose from, all of which would be a significant improvement on ours! http://www.furniturechoice.co.uk/Dining-Room-Furniture/Dining-Tables-and-Chairs.htm

However, my favourite is the Harrison & Newark Extending Dining Set.  It comes with four chairs at £499 which I could purchase if I won the competition.  I would need to add a couple more chairs though but at £69.99 each this is a small price to pay for the ability to sit down together at every meal time. 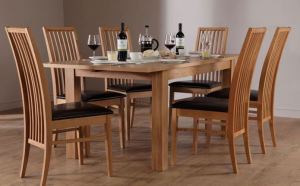 I am sure that you would agree that this would be a vast improvement to our living space and really improve the quality of our family life.

A while ago I won a couple of National Trust family passes from @southeastNT.  I hadn’t got around to using them as I have been busy at work, but as it is the Easter school holiday myself, DH, my mother-in-law and children 2, 3, & 4 decided to make use of them.  We visited Belton House, which is just outside Grantham in Lincolnshire.  Belton was begun for Sir John Brownlow in 1685 and is a wonderful example of a large English country house.  Details can be see here: http://www.nationaltrust.org.uk/belton-house/

I visited it myself when I was a child and I have taken my children on a number of occasions due to the lovely adventure playground with a mini train that runs through a forested part of the grounds.  The kids love it  there and the play equipment has something to challenge all of them despite number 2 being aged 13.  To be honest it also challenges myself and the DH too – I felt obliged to climb the giant tree trunks and always challenge the kids to see who can balance all the way along the balance rope (I get my excuses ready early such as ‘I was carrying the bags’, ‘my shoes are not very suitable for this’ etc and I am always beaten by No 2!).  As usual No 4 impressed us all with her ability to travel along the monkey rings apparently effortlessly, whilst the rest of us fell off the first ring.

As my mother-in-law was with us we decided to visit the house, which we usually don’t do due to the desperation of the children to get to the adventure playground.   No 4 loved seeing the bedrooms and decided that she would love to have a bedroom like the Red Bedroom.   They also loved using the tour guide leaflets and navigating around using the map which are new additions since I was last in the house.  The NT guides in each of the rooms were extremely knowledgeable and happy to chat to the children about the features in each room.  They all wanted to move in but it was only near the end of our walk around that No 3 noticed that there were no electronics anywhere in the building and at that point moving in lost its appeal!

As a child I remember loving the tunnel between the house and the old kitchen but it has been closed the last few times I have been in the house, so I was delighted that they are now giving guided tours of the basement.  The lady taking the tour was extremely knowledgeable and gave us lots of information about the way of life below stairs and how different it was in Downton Abbey!  The kids were all fairly shocked at the jobs that they would have been expected to do in years gone by and by the contrast between the upstairs and the downstairs.  The tour lasted about 50 minutes and by the end there was some complaining from the younger two about tired legs and boredom but this was soon alleviated when they were running across the lawns towards the playground.

We could have spent considerably longer there as we did not have time to see the rest of the grounds but it was a lovely afternoon out and was finished off with a trip to the gift shop and the cafe.

At £33.50 for a family ticket for the whole property it is not a cheap day out.  This does reduce to £25.60 for the grounds only but this is still pretty steep for a trip to an adventure playground.  Thankfully it didn’t cost us anything with the free pass and we have now purchased membership of the National Trust for Scotland so hopefully we will be back in the adventure playground soon  (they have a reciprocal agreement with the National trust in England so you can access all of their properties but it is about £25 per year cheaper).

Welcome to my new blog.  I will be blogging about our family life, entertaining the kids, managing our money (or lack of!), living with anxiety and anything else that I think others may be interested in.  I am a big fan of competitions so when I am up and running fully I will be hopefully running a few of my own.  I always welcome feedback and comments so please feel free to get involved.

Loobie Lou and Tilly too

Loobie Lou and Tilly too